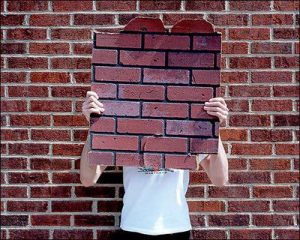 Yesterday I was rolling along carefree in my love bus when I hit the brick wall of someone else’s reality envelope. It has been a while since anyone so entrenched has entered my sphere of awareness. Although it was created from a narrow scientific viewpoint, it brought some things into focus for me.

Every embodied consciousness on the planet has a picture of reality that they have created. Much of what we accept as truth is a result of information embedded into our consciousness through years of repetitive exposure. The more you hear something, the deeper it sinks into your subconscious, and over time becomes a solidified belief. Religious indoctrination is an obvious example where you are exposed to a belief system as a child that becomes the foundation of your reality. If your accepted belief is then challenged by the religious doctrines of others, you recoil in horror, “How can you believe such an obvious fabrication when my truth is the only truth?”

I find myself straddling these two groups as I attempt to bring the religious aspects of soul and consciousness closer to the science of quantum theories and the operation of the universe. They are both very tough crowds that do not like to have their foundational understandings undermined. When you start connecting consciousness to energetic particles with zero mass that comprise the universe and are still not clearly understood, you are going to get pushback when it challenges accepted paradigms.

The awakening communities have an advantage in the fact that they are connected to a larger awareness. If you have meditated with any frequency you are well aware that your consciousness is connected to your body and not created from it. As you float in the vastness of your expanded awareness you realize very quickly that you are not alone and that connections in consciousness are immediate. Your reality paradigm quickly becomes permeable as you walk through the door into this metaphysical state because the synchronicities that subsequently occur will push you to further awareness.

When you experience telepathic communication for the first time, the reality of it is confirmed and your view of what is possible has expanded.

When you energetically heal a condition in another person that accepted medicine says is impossible, you begin to question what else might be possible.

When you have a vision of a future occurrence and then watch as it occurs, the definition of linear time falls away.

I present the information that is being provided to me and share it at every opportunity. This is the mission of all who identify as “Light worker”.

Be the light that illuminates the path for others along their journey and allow that some are not ready to begin.