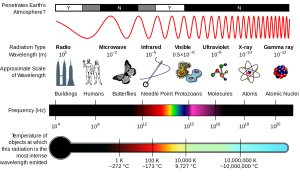 Question:
Is Prime Creator a red mass in the same way Source is a big blue ball at the center of everything? I can explain why I ask if you find my question relevant.

Response:
I am humbled and honored by the questions that are being asked in this forum. This is what the expansion forum is meant to be. Not a repeat of the same memes and current events, but a place where higher perspectives are shared. I am working on two other responses but this one is easy, so I’ll address it now.
——
As we attempt to describe concentrated levels of energy beyond anything that we as humans can comprehend, the first question that comes to mind is, “How are you observing it?” The image of the electromagnetic spectrum associated with this article shows the limitations of the human eye as it interprets the visible spectrum. We have technology that measures the higher intensities, but their interpretations are limited to the intended purpose.

I suppose the curious nature we all possess leads us to look for the source of everything and want to know about prime creator, but it is beyond the scope of our current ascension into 4th or 5th density constructs. The relevance of prime creator to our current understanding is that it is the dynamo fueling everything else as the energy cascades down to the zero point of planetary creation. The mechanics of this cascade and subsequent ascension of individualized consciousness within it is covered in the second book.
Since we aren’t going to be looking at the magnitude of coalesced energy at the universal seat of consciousness or prime creator with our eyes anytime soon, let’s use the information provided in the electromagnetic spectrum graph associated with this article.

This graph shows the measure of electromagnetic energy of a photon. I don’t want to go into the relationship between frequency and wavelength and why they are inversely proportional in the graph, but what you see is that as energy increases, so does frequency as wavelength becomes smaller. In the visible spectrum we interpret this change in energy as colors, where low energy moves from black to red and increases into violet before we can no longer observe it.
This scale, while not directly related to ascension, gives you an idea where the concepts of dark and red being negative energies and violet being associated with positive ascending energies came from. A sensitive person will FEEL the energy signatures long before their consciousness assigns a color to it.

The temperature scale below the visible frequency scale is not relevant to the energy of consciousness… unless of course it happens to be powering a system star that the planets depend on, but that is a separate topic. What it does show is a clearer representation of what increasing energy will appear as when you are disembodied consciousness looking at it.

As the energy increases from that of universal consciousness to prime creator the perception as viewed from consciousness would be the blue growing ever lighter toward a golden white hue. As the energy continues to increase the perception of gold decreases until nothing but pure white energy remains. I feel the need to describe it as something more than pure white energy, but the intensity, the purity, the absolute nature of it is beyond anything words can capture.

What I share here are words that are read by others who must assess their value and validity. For me it is different because I have experienced, and seen with my own consciousness, the things I am describing. The creation and ascension of consciousness that I describe is both magnificent in the enormity of the constructs that have been created, and startling in the simplicity of repeating patterns that has been used to create them.

When you see it all for what it is, there is nothing that needs to be done beyond finding joy in each moment.