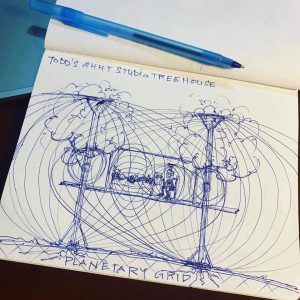 A post from Hannah who watched the latest video:

Todd Deviney Today I was traveling smoothly along I95, when suddenly traffic came to a dead stop, and my GPS showed a red line along my path for some miles. Ugh. Shortly thereafter I started to notice it was getting warmer on this already hellaciously hot day. Fiddled with the AC, but it was definitely now only blowing hot air though just moments before it was fine! We inched along. Slowly. I grew a sweat mustache. We crawled a bit as I fiddled with the AC more, prayed a little, swore a lot, finally took out my trusty journal and started scratching out some notes stream-of-consciousness style which yielded a few insights. Your description of the treehouse studio you are building popped into my mind, so I started sketching what had come into my mind when I first heard your recording with Aurora. While sketching I was wondering about…

1) The consciousness of trees: includes the entire thing, roots to treetops?
2) What, if anything, is unique about tree consciousness?
3) Why is being off the planetary consciousness grid better?
…is this sketch what it would look like? If not, what needs to be fixed so it’s correct?

1) Trees are a lower second density consciousness. This means that the center column is not fully formed and the seat of consciousness has not reached critical density. The array in your picture would therefore look like a ball with triangles at the top and bottom and a denser portion of particulate at the center that has not yet become a secondary rotating array. The sphere of consciousness is limited in size by the energetic interactions between the particles. It doesn’t matter if it is attached to a giant Redwood, the array of consciousness it is still second density and limited by in diameter by the universal aspect ratio.

The consciousness of a tree is attached at the root center. Regardless of how big the tree eventually becomes, the center of the sphere will always be attached at the central node where the root system and the trunk meet. This is the energy center, the heart of a tree. The trunk, limbs and extensive root system would then be like arms and legs on a human. You can live without an arm or a leg but you cannot live without your heart and brain. The same is true of a tree that is cut down and whose stump subsequently sprouts new growth because it is not dead. The trunk and branches of a tree contain an energy network that extends the energy of the consciousness and allows it to ‘live’ and grow beyond its conscious diameter. Some sensitives can see the colors or feel these auras that surround the various plants.

2) The unique nature of tree consciousness is that it is a second density consciousness whose rotation has not matured. It has not reached the threshold of self-awareness and as such is not capable of absorbing negative polarity. This coupled with the ability of trees to grow tall and strong make it a unique insulator from the planetary grid. Our current material construct is a collective creation built upon thousands of years of polarized conquest and separation. Those of us who are awake and are focused on increasing light and love are working to change that, but it is a big ship and seeing a course change takes a period of time to manifest after the rudder has been moved. Couple that with the fact there are still those in separation attempting to push back and you can see that we are engaged in a “process”. Eventually we will throw these people off our boat and set our own course into a new future, but we aren’t there yet.

3) Because the consciousness of trees is impervious to negative polarization it acts as a buffer between the planetary grid solidifying our reality and the consciousness elevated within my studio for a session. This creates a sacred space closer in energetic signature to ascended positive collectives. This is the same concept as putting a radio antenna on a tall mountain; less interference, better reception and clarity. A client may enter the studio with some negativity, but it will no longer have a foothold to the grid. Realigning their energy systems to release it will be easier and they will leave closer to unity because of the reduced interference.