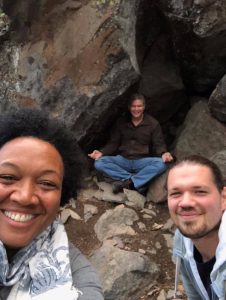 If you have read my book, follow my blog, or watch the videos on my channel, you know I’m awake and following higher guidance. Despite all of that I am not the type who is going to go somewhere without an understanding of why and what the benefit will be.

And so it is that I currently find myself in Mt Shasta. I’ve been here since Sunday honing my skills as a regression therapist. The seminar is nice and providing some valuable insights, but I knew when I booked this excursion that it was only the pretext I would agree to that would get me out here. This has happened before and I have met some amazing people working for the highest good of all as a result.

Anyone who has been to Mt Shasta knows it is a small town and you will have to drive a while from whatever airport you arrive at. I flew in to Medford OR, so I had an hour and a half drive watching this majestic mountain come into view and increasingly dominate the scenery. To say that the mountain has energy and calls to you does not do it justice. As my drive continued, it felt like a bubble was being placed around me as I disconnected from the world around me; as if time was losing its grip on me. That feeling was reinforced by the small town of Mt Shasta that feels like a throwback to the laid back days of a different era. The town sits in the shadow of the mountain, as if it is the protective parent watching over the town it gave birth to.

Since I have been here I have felt the mountain calling me but my commitments have me on a tight schedule. Each day at lunch I wanted to drive up to some of the sacred areas to say hello to the energy of the planetary consciousness so obviously pouring out of this vortex point. Yet each day I found myself engaged in wonderful conversations with positive people full of light and the best of intentions for the collective. I never turn away from anyone who wants to have enlightening discussions. That’s the whole reason awakened people find each other, to share their conscious perspectives while they share energy subconsciously and tune their frequencies toward planetary unity.

Yesterday as I started my morning I engaged in a brief meditation and asked,

“Why have I been brought here?”

I would have been okay with what I was already doing, but it seemed like there was something else, something energetically important still waiting to reveal itself. In one of my previous sessions where I connect to my totality of consciousness they came right out and said,

“It’s so much fun to watch him play this game. He’s a good player.”

That statement has never left me, especially when I want direct answers from them and I get riddles. This morning meditation was no different. It doesn’t matter how ascended and awake you think you are, you will never be allowed to see the exact steps you take forward because that wouldn’t be fun. I get glimpses of important decision points -like this one to come here- and work toward them, but I never get to see the whole picture because apparently that would take the fun out of the game.

After my morning meditation I made my coffee and checked my social media. Strangely I found that one of my readers had posted pictures of her and her friend at Mt Shasta. Hmmm… that was an odd coincidence. I reached out and let her know that as luck would have it, I was here too. We arranged to meet later that day; and I think I heard the universe laughing.

She was with a friend who had flown all the way from England so they could do energy work on the leyline vortex point that exists within Mt Shasta. We had an amazing conversation about the work they are doing, the work I am doing, the work others are doing, and how it ties into the movement of our collective reality into the new construct. The next thing I knew I was on the mountain at ascension rock. I can’t explain what happened there because it felt like I was in session. My consciousness had been pushed back as something larger than myself came through and did whatever it was we were supposed to do. It was getting dark when we finished at ascension rock but we still went to another site. I found myself on a bluff with an expanse that looked like a rocky landing pad. At the edge of this opening were trees that appeared to fence the area. As we blended our energies once again, a grey fog descended and I saw things emerge from it that I cannot explain. It was dark by now but a golden light seemed to be shining from somewhere above my field of vision, as if a helicopter spotlight had been pointed at me. I knew I shouldn’t look up, but I did anyway and there was nothing there but dark sky. I returned my eyes to the grey fog where the fence line of trees should be. The golden glow then shifted from a single point to what the sun would create if it was directly over you at high noon. It continued to shine above me long after we finished and had begun our walk back to the car.

To describe what I felt as intense does not do it justice. These experiences are beyond anything I have physically encountered up to this point in my life. Being in a session requires a detachment from the body so that you can travel and experience in consciousness. What I experienced on the mountain was an integration of consciousness to the energy network of my body. I am still in the process of understanding what occurred and for what purpose, but my higher connection seems to be satisfied, and rather smug.

“Do you see now? Wasn’t that more fun and exciting than knowing what was going to happen?”

Sure I suppose, but the project manager in me who likes to plan and schedule has a hard time trying to accommodate these unanticipated changes. As I indicated in my book, I have let go and now let the current of life steer my course. It is difficult to navigate in the dark toward a destination, but when it finally comes into view it is rather exhilarating. The ascending collective is farther along the path toward the new age of unity consciousness than it appears. This fact is continually reinforced for me by the people I am meeting and the energies I am feeling.

The image associated with this post are of me and my new colleagues at ascension rock on the evening described above.